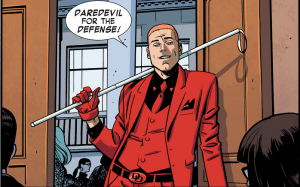 I am a huge fan of the superhero genre and the Marvel Cinematic Universe in particular. So, it should be no surprise that I binge-watched the Daredevil series on Netflix. Only by neglecting my parenting duties was I able to make it through the series in a weekend. Was it worth it? Yes, indeed! The series is true to the comic. It is gritty and violent (so violent!) and filled with adrenaline-inducing fight sequences as well as that signature Marvel wit.

Yet, the Daredevil character presents me with a nagging question: Is Matt Murdock an ethical lawyer? Murdock often takes cases only for the purpose of learning more about the criminal he is purportedly representing. Is this not a conflict of interest? Can a lawyer zealously advocate for his client, when his sole motivation is to work against that client’s interests? While the “criminal defense attorney in disguise” makes great narrative sense, in that it provides our hero with the perfect cover to learn about the inner workings of the criminal mind, it is almost certainly unethical. Unfortunately, the Daredevil story represents another example of how a layperson’s understanding of the legal profession digresses from actual practice.

To be sure, let’s do a little, shall we say, legal analysis. Let’s take a look at the Model Rules of Professional Responsibility, and decide for ourselves whether Murdock’s Daredevil persona has created an ethical quandary for his legal practice.

The series actually begins with a classic violation of the professional rules regarding client solicitation. In the first episode, Foggy Nelson gets a tip from his cop friend about a potential criminal defense client, one Karen Page. Matt and Foggy then corner Karen in the interrogation room and pitch their services to her.

(a) A lawyer shall not by in‑person, live telephone or real-time electronic contact solicit professional employment when a significant motive for the lawyer’s doing so is the lawyer’s pecuniary gain, unless the person contacted:

(2) has a family, close personal, or prior professional relationship with the lawyer.

Now, one could argue that Matt Murdock was not, in soliciting Karen, “motivated by pecuniary gain.” He ultimately takes the case despite Karen’s lack of money. But, as you might recall, Foggy certainly was motivated by pecuniary gain. He almost walked out of the room when Karen said she could not pay. And, it would appear that Matt was initially motivated by the potential for a paying client; he agreed to represent Karen for free only after he realized, through his truth-detecting powers, that she had been framed for murder.

Let’s move on to what is perhaps Murdock’s most defining violation of the professional rules:

(1) the representation of one client will be directly adverse to another client; or

(2) there is a significant risk that the representation of one or more clients will be materially limited by the lawyer’s responsibilities to another client, a former client or a third person or by a personal interest of the lawyer.

(b) Notwithstanding the existence of a concurrent conflict of interest under paragraph (a), a lawyer may represent a client if:

(1) the lawyer reasonably believes that the lawyer will be able to provide competent and diligent representation to each affected client;

(2) the representation is not prohibited by law;

(3) the representation does not involve the assertion of a claim by one client against another client represented by the lawyer in the same litigation or other proceeding before a tribunal; and

The highlighted text above should make the answer to our question clear. In episode three of the Netflix series, the law firm of Nelson & Murdock agree to represent John Healy, one of Wilson Fisk’s enforcers, who has murdered a rival gangster. Murdock, using his truth-detecting senses, knows from the beginning that Healy is guilty. In fact, it becomes clear during the jailhouse interview that Murdock’s sole motivation for taking on the representation is to learn more about Fisk’s criminal enterprise, so that he ultimately can bring down Healy’s employer. And, of course, as soon as Healy is acquitted, Murdock, as Daredevil, confronts Healy in an alley, beats him up, threatens his life, and ultimately causes Healy to commit suicide.

As a lawyer, did Murdock behave ethically? Decidedly not. He took on the representation of Healy even though there was a “significant risk” that his representation would be limited by his responsibilities to numerous third parties (i.e., everyone he is trying to protect from Kingpin) and a “personal interest.”

One might counter: but, Murdock did get Healy acquitted! He represented him well in the courtroom, and only beat him up once the representation was finished!

Yet, this does not absolve Murdock from his ethical quandary. The fact that one does not actually work against a client’s interest in the courtroom does not permit a lawyer to take on a client for whom there is a concurrent conflict.

The only way a “concurrent conflict” can be resolved is if all the elements of subsection (b) above are met. Even assuming elements (1) through (3) were met here, Healy was certainly not informed of Murdock’s conflict of interest and did not, according to (4), give “informed consent, confirmed in writing,” to the conflict.

But, you might say: once the representation was over, Healy was no longer a client! Murdock’s ethical obligation was over! He was free to go beat him up! I would have to point you to subsection (c) of Model Rule 1.9, to wit:

(1) use information relating to the representation to the disadvantage of the former client except as these Rules would permit or require with respect to a client, or when the information has become generally known; or

(2) reveal information relating to the representation except as these Rules would permit or require with respect to a client.

Ouch. This pretty clearly would prohibit Murdock from using information gathered during the representation to “disadvantage” Healy later by, you know, confronting him in an alley with the information and forcing Healy to disclose information.

Now, there may be questions as to whether, from an attorney-client privilege standpoint, under the “crime/fraud” exception, Murdock would be permitted to disclose to authorities information about criminal activities gathered through his legal representation. That, however, is an evidentiary question of privilege, and not strictly a question of professional responsibility. That’s a complicated distinction that I won’t discuss in-depth here (primarily because I have clients to represent, and ought not be spending my time writing about Daredevil!)

Let’s look at two additional ethical issues presented by the program. First, the prohibition against “ex parte” communications between attorneys and represented parties.

In representing a client, a lawyer shall not communicate about the subject of the representation with a person the lawyer knows to be represented by another lawyer in the matter, unless the lawyer has the consent of the other lawyer or is authorized to do so by law or a court order.

In several instances, Murdock (as Daredevil) engages in ex parte communications with Fisk, and members of Fisk’s organization, even though Fisk’s enterprise is represented by counsel in the tenement litigation, to which Nelson & Murdock are directly adverse. In episode 10, Nelson v. Murdock, Foggy confronts Murdock with this ethical quandary. Murdock had urged Foggy and Karen to refrain from trying to “take the laws into their own hands,” and instead to focus on using the legal system to take down Fisk. Rule 4.2 is a corollary to this “focus your dispute through the legal system” approach. When dealing with represented parties, lawyers are expected to deal only with the other lawyers. Lawyers should not side-step opposing counsel and attempt to bully, intimidate, or otherwise influence a represented party without that party having the benefit of counsel. By regularly communicating with Fisk and members of his organization, especially in an adversarial context, outside the presence of Fisk’s lawyers, Murdock runs afoul of Rule 4.2.

Finally, I have concerns regarding Murdock’s adherence to this basic rule:

A lawyer shall act with reasonable diligence and promptness in representing a client.

One overarching question I’ve had while watching the series is: when does Matt Murdock actually practice law? He seems to spend the vast majority of his time fighting crime and hunting down Fisk’s allies. In the latter half of the series, nearly every shot in the law offices of Nelson & Murdock finds Karen Page sitting there by herself, wondering where Foggy and Matt are. Karen and Foggy are always looking for Matt, but he never seems to be around. The question presents itself: does Matt Murdock have any clients? And if so, is he acting with reasonable diligence in representing them? Can one maintain an effective law practice while also spending enormous time and energy dismantling a global crime syndicate?

In conclusion: while the “criminal-defense-lawyer-by-day / crime-fighter-by-night” theme makes great narrative sense, it forces our hero to run afoul of many of the most basic ethical rules guiding an attorney. Matt Murdock has chosen his “higher” ethical obligation as vigilante over his professional obligation as an attorney. While we may love him as a superhero, the State Bar of New York would have no choice but to scold him as an attorney.